I've been thinking a lot about armor lately, and by extension my armor system. It's too complicated, Nobody wants to remember three seemingly random numbers which attempt to mimick real world armor. Its clunky, and ugly. Which is the opposite of what armor is. Armor is pretty and elegant. So a pretty and elegant system is better at mimicking armor, right? 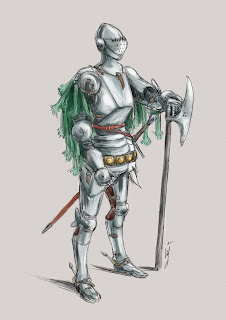 Okay, the first step, it to make your players describe their attacks. From there you can determine what weapon they're using as well as how they use it. Any weapon can use any type of attack as long as the player can justify it adequately.
After damage is rolled, the defender rolls resistance, which is based on the armor type as listed below.

You do not gain any resistance to melee weapons while you are prone, because at that point any dude can just walk over and stab you. 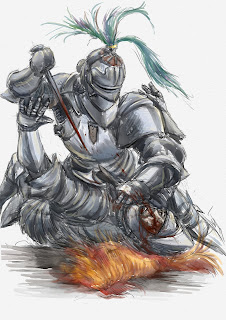 The average damage tends to rest somewhere between 1-3 pretty consistently based on my current weapons system. And that feels pretty alright to me. Obviously these aren't based on the attacks monsters would necessarily be making, which are much more likely to deal higher amounts of damage, but armor will do a good job of protecting you against other humans.

There are a few advantages rolling has over static numbers in this case.

For starters, it gives us a wider range. Previously, I had proposed that Plate reduced all damage by 8, meaning the attacker, at maximum damage with the highest damaging weapon type, deals 2 damage. Which straight up does not work. With this new system, the damage is reduced by a die roll, which means the damage you deal usibg the highest damage weapon type can be anywhere from 9 to 0, which occurs less than half the time unless the die rolls are equal, in which case it's exactly half the time.

The other benefit is that it doesn't force you into doing anything. Previously you were shoehorned into using polearm weapons against anyone wearing plate. Which doesnt make sense. While a polearm would be ideal against an armored opponent, its not like it's invulnerable to everything else.  On the otherhand, its not gonna be as easy on you to take your tiny dagger against a fully armored opponent.

I dunno, maybe my armor system in general is a bad idea. Here's another picture. 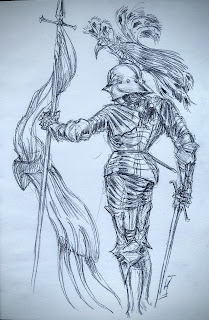 All the art in this post was done by Eol, a talented artist who draws people in armor. If you like what you saw, consider checking out his Twitter or Youtube Channel.
at April 09, 2020