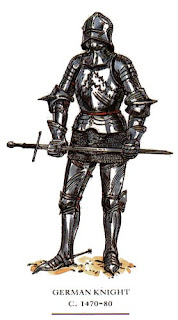 Armor in RPGs is often misrepresented, not only is the armor class system flawed, but the types of armor, as well as levels of protection among them is also misaligned. This post will be my attempt at both explaining the problems, as well as providing my own solution.

Let’s start with the Armor Class system. In the armor class system, your level of armor as well as your dexterity score influence how likely someone is to damage you. Do you see the problem? It actually makes perfect sense for your dexterity score to influence your Armor Class, after all, that represents your skill at dodging, but the armor doesn’t help you dodge the blow, does it? I thought not, it simply lessens the impact of the blow, and generally pretty well. So while the idea of Armor Class isn’t wholly unnecessary, perhaps armor should be a separate part of the whole thing.

The next part to discuss is levels of protection. You generally see in system rules three little sections of armor: Light Armor, not that protective, but provides free movement; Medium Armor, more protective than light, but also more restrictive; and Heavy Armor, really protective, but really restrictive. Well, those are some pretty misinformed rules.
Light armor is often interpreted as leather armor, and if you’re going to use leather in your games, more power to you, just know that leather armor is only a fantasy trope because of movies. Historically, it was all but nonexistent. Anyways, leather isn’t very protective unless it’s thick, and thick leather is hard to move. Combine that with how expensive large amounts of quality leather would have been, and you have expensive, restrictive, and ultimately ineffective armor, what’s the point?
Ah, but here comes the gambeson, a light, cheap, and effective armor; made by sewing together layers of linen, which is basically the same idea as a bullet resistant vest. Gambeson was pretty good at protecting you, unless your opponent has just sharpened their sword to a razor edge; in which case you will get hit, but only for the first few hits, because sharpened edges dull quickly. Gambeson were also good against stabbing and impact based weapons. Remember how I told you they were similar to a bullet proof vest? The layering of thick fibered fabrics allows impacts to spread outwards before they do any damage to the actual person, which means the strike is significantly lessened.

Medium armor is thrown in as chain, I won’t say much about this; except that chain wasn’t much more protective than gambeson, the only difference being it specialized in defending against cuts rather than stabs or impacts.

Heavy armor, often plate or similar steel armors is put out there as a human tank, difficult to move in, but highly protective. In reality, it is both highly protective and very easy to move in; because it was designed to be. There are still issues with plate though.
First of all, they still have weight. Though not enough to make them clunky, it is enough to tire you over time. That’s why you wouldn’t want to wear it all day long. The second problem is visibility. Though there were helmets designed to allow for a better range of vision, they would always be sacrificing protection.
You probably couldn’t give two rats on a stick about any of this, so I’ll move on to the houserule you’re all here for.

The following system also puts in place a variety of historical strategies. For example if swords do 1d8 damage, I need to use a polearm on the guy in plate. It also puts to use the idea of wrestling an armored opponent to the ground so you could stab them through the eye slit.
I feel that the system is simple enough to be OSR, but it also makes the game a lot more strategic. Also, as a nice little bonus, you can make it so that damage to armor needs to be repaired, creating a nice little way to tax your players.

Armor needs to be repaired when it’s been used. In order to simulate the damage done to your armor, keep track of every time your armor fails to protect you, which basically means your D.R. is not enough to prevent you from taking damage. For every time this happens, your armor gains a damage point.
Damage points can be removed from armor by paying a smith to repair it.
I’m not going to put a set price on repairs because players should be allowed to haggle.