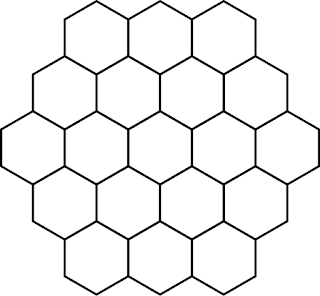 Hex Size: 6 miles side to side.
Travel Speed is based on movement. The party travels at the speed of the slowest party member. The distance the party can travel during one watch is 1/3 of their movement score.

One watch is a four hour period of time. There are six watches in a day. Players need two watches to rest. If next to each other it is a full rest. Players need one watch period to set up camp. This effectively means that players can move [move] hours per day, unless they decide to explore or forage, which also takes up one watch. Preparing food for your ‘lunch’ occurs when you set up camp. There are a series of actions you can choose to do during each watch:
Travel when you choose to travel, you move at 1/3 of the slowest party member’s move. If your total travel distance exceeds the slowest party member’s movement, you gain 1 exhaustion.
Rest Resting restores 1d6 +Level HP and one Exhaustion. If you take two rests in a row, instead all hit points and exhaustion are automatically removed. You need a total of two rests a turn to stay well rested, for each rest you miss in a day, you gain one exhaustion.
Set up Camp This is when you set up everything to sleep, or create a base camp to explore the surrounding area, perhaps over the next few days, just don’t get lost.
Forage Foraging takes up 1 watch, and scores you a neat 1d4 rations. You can also make a hunting skill check to turn this it into a d6.
Explore Exploring makes it easier to encounter cool things in the hex you are in, Since you are spreading about rather than making progress walking around, it only makes logical sense that this be a separate watch action rather than a half speed feature or whatever.

Each hex has a d12 encounter table (maybe this is too much?), the first six things are the interesting and cool hard to find stuff, so a town isn’t going to be on this list, but the secret shrine to the blasphemous blood god in the surrounding woodlands would be. When you choose to explore rather than just wander through the hex, remove the last six entries from this encounter table. This means that you are guaranteed to encounter at least one interesting thing.

The world map is divided into regions, each of these regions will have a hex map made up for it. These hexes will be labeled from left to right with lines like A1, A4, B1, etc. and will have an encounter table and possibly location keyed up to it.

Exhaustion basically takes up an inventory slot, and will eventually overencumber you. Overencumbrance reduces your movement speed and will therefore make you move slower, it’s a self-destructive cycle if you for whatever reason decide rest takes up too much danged time.

And there we have it, my completely un-polished, un-refined, un-playtested ruleset for hex traveling. I would start testing it out, but it’s not relevant to my current campaign, at least not yet. I’m just writing this down as a primer for when I get more involved in my new setting (I think it’s going to be called Mahkah right now). If anyone has any feedback let me know in the comments or however else you think is comvenient.