Do any of us like realism in our RPGs? I know I do, that's why I'm writing this, a post that fixes weapons in RPGs, because I think they suck.

Within each of these categories are specific weapons, they deal different types of damage, and sometimes have abilities. 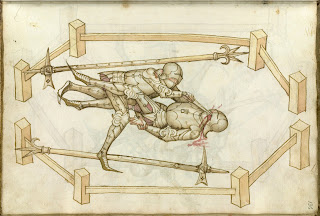 First things first, daggers are not main weapons, actually, neither are swords, but we'll get to that later. I'd put them at 1d6 damage like they are in any other system, except they provoke an attack if the target is not prone. That way you can still use them, but it at least holds the obvious danger that close-quarters fighting would hold. Also, any light bludgeoning weapons would never have enough force to deal lethal damage, so there's also that. 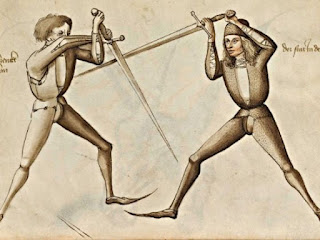 Swords were only really used by themselves in duels or as civilian self-defense. A peasant probably won't have a sword, but anyone else will. Something to clear up, because maybe a lot of you know this, but maybe not. Long swords were strictly two-handed weapons. If you want a weapon that could be one or two-handed, that would be a hand-and-a-half, or bastard sword, a one-handed sword would be known as an arming sword. But keep in mind, they were all just called "swords".

As far as axes and hammers go, they were weapons used in the past, but they weren't the massive two-sided things we picture them as, they generally had small heads, that would carry a similar weight to a sword. They would even hit harder, since all the momentum is concentrated in the head.

Polearms were the main type of weapon from the medieval period. Why would you fight somebody within inches of feet of you when you could put a 6-12" pole between you and your enemy? There are so many different types of polearms, I'm honestly just gonna put a general writeup and give you a picture of some.

If a polearm has multiple damage types, apply multiple effects, and just make it cost more or something if your worried about balance.